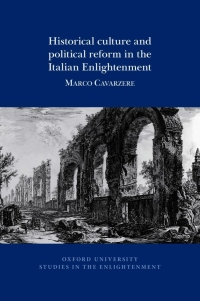 For centuries the society and politics of Old Regime Europe relied on the strong connection between past, present, and future and on a belief in the unstoppable continuity of time. What happened during the eighteenth century when the Age of Revolutions claimed to cancel the previous social order and announced the dawn of a new era? This book explores how antiquarianism provided new political bodies with allegedly time-hallowed traditions and so served as a source of legitimacy for reshaping European politics. The love for antiquities forged a common language of political communication within a burgeoning public sphere.

To understand why this happened, Marco Cavarzere focuses on the cultural debates taking place in the Italian states from 1748 until 1796. During this period, governments tried to establish regional "national cultures" through erudite scholarship, with the intent of creating new administrative and political centralization within individual Italian states. Meanwhile, other sectors of local societies used the tools of antiquarianism in order to offer a counter-narrative on these political reforms.